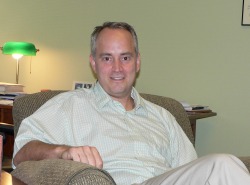 Dr. Gottfried is a licensed psychologist in the state of Missouri. He received his Ph.D. in Counseling Psychology from Arizona State University and his Masters of Arts degree, also in Counseling Psychology, from Boston College. He received additional training in Systems Therapy at the Kantor Family Institute in Cambridge, MA during his Master's studies.

Prior to entering private practice, Dr. Gottfried worked with diverse clients in a wide variety of settings: University Counseling Centers, family therapy agencies, psychiatric hospitals, and in-home therapy with adolescents on probation. He has supervised and trained graduate students and has taught psychology at the graduate and undergraduate level.  He belongs to several professional organizations and has held administrative positions in many of them. He has published and presented research at national conferences on men and masculinity.  More information on Dr. Gottfried's background is listed below: